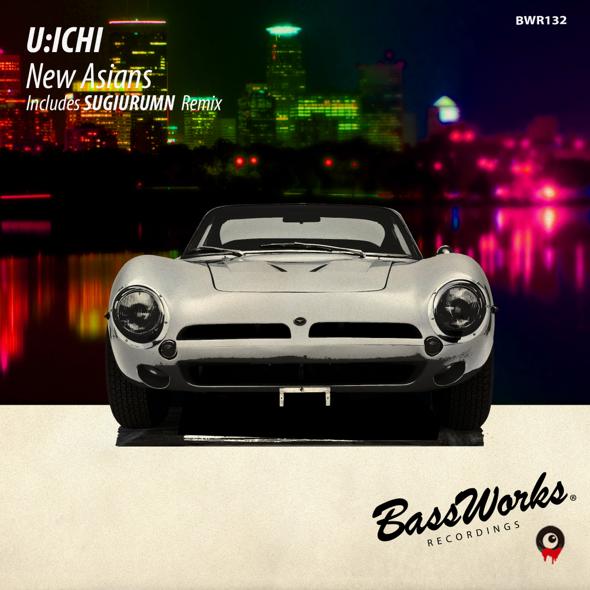 Turn on!! Tune in!! BASS WORKS!! Sturm und Drang!! 132nd work!!
Orginizing a popular party, ” WEAVES ” at WOMB also being known for a collaoration with DOSEM, Mr.CROSS OVER, U:ICHI from Okayama drops a much-awaited new work from BASS WORKS RECORDINGS!!
Having got inspiration from his Hong Kong trip last year,U:ICHI made this fnatastic track into super oriental!! It’s literally ” New Asians “!!
A.N.D it comes with a dark fantasy remix from our man, Naked Kinky SUGIURUMN who is 10-year friend with U:ICHI!!
We, BASS WORKS RECORDINGS will never let you down!!

U:ICHI (WEAVES / HOUSTRIKE )
U:ICHI started his career as a DJ in an urban city, Okayama.  He soon begun playing at a biggest club in the town and went on a distinct stance as an organizer DJ. In 2003, U:ICHI has launched his own organize party “FORCE” and established a unique party scene collaborating music, visual, and space decoration with the presence of voluptuous drug queens. The party was a huge success and it was renowned as the largest party in the area. With the success, U:ICHI became the leading organizer who has made the local scene. In 2008, he began DJing in Tokyo. U:ICHI ambitiously aims to achieve cross over of genre-less fusion which are segmented in party scenes, with “all around house” as the keyword.
From 2012, U:ICHI started producing tracks. “Love Phantom” which was released from GALAXY RECZ has received 3rd on the Progressive House genre of WASABEAT weekly chart even thought it was their first release.
“Five Days (DOSEM remix)” which was co-produced with his very close friend DOSEM (Tronic/Suara) has recorded top sales of the year from GALAXY RECZ and U:ICHI is continuing to release aggressively from domestic and international labels. As for the international label, he will be releasing tracks “SPACE RODEO ” and “Africa of Another Planet” from French label Groove Factory with was co-produced with DJ YOKO.
In 2013, he launched his own organized party “WEAVES” at WOMB. The party stages the brilliant mix of his ability to crossover sounds with international artist and produces its uniqueness.
He has succeeded in Japan tour with emerging young international artists focusing on Spanish club scene artists such as DOSEM, HENRY SAIZ, COYU, EDU IMBERNON, and MENDO. By bringing the sound of world famous Spanish Tech House/Techno label SUARA in to Japan has shown his rising ability as a promoter. The “WEAVES NATION TOUR featuring DOSEM” in May 2105 that took place in 4 cities in Japan struck a remarkable deep and solid response. He is one of the emerging artists with the passion to WEAVE (to connect), named for his party, and will be the one who will heat up the party scenes in Tokyo.

SUGIURUMN (BASS WORKS RECORDINGS)
SUGIURUMN Has Released 7 Albums As Well As A Lot Of Singles And Remixes As A Producer Ao Far. He Welcomed Well-Known Singers In His Album Including Aran McGee(Creation Records), Mark Gardener (Ride), Bez(Happy Mondays), Rowetta(Happy Mondays), Tim Burgess(The Charlatans), Kram(Spiderbait), and Sideshow Bob(Galliano). Also His Tracks Are Remixed By World Top DJs / Producers Including D-nox and Beckers, Axwell, Steve Angello, Santos, Kaskade, Infusion, Richard Gray, Plastik Funk, Terry Farley, Peace Division, and Ken Ishii. He Won Attention As A Producer In Europe And Which Made Him To Expand His Playground Worldwide. As A DJ, Having Played At European Top Venues Including Pacha(Ibiza) And Sankeys(Manchester) , Regular Gigs At Asylum Afterhours(Honolulu) And in Asian Countries, He Shared A Lot Of Time With A Number Of Real Party People Around The World.
It Was in 2013 That He Launched His Own Label, BASS WORKS RECORDINGS, Where He Sends Out Serious And Real Dance Music To Underground Party Freaks, Crossing Over Music Categories From Techno Thorough House. The Label Has Released Over 100 Tracks, Involving Most Of Japanese producers. The Latest Album『, 20xx』(2014) Consists Of Genre-Straddling Deep Floor-Oriented Tracks,