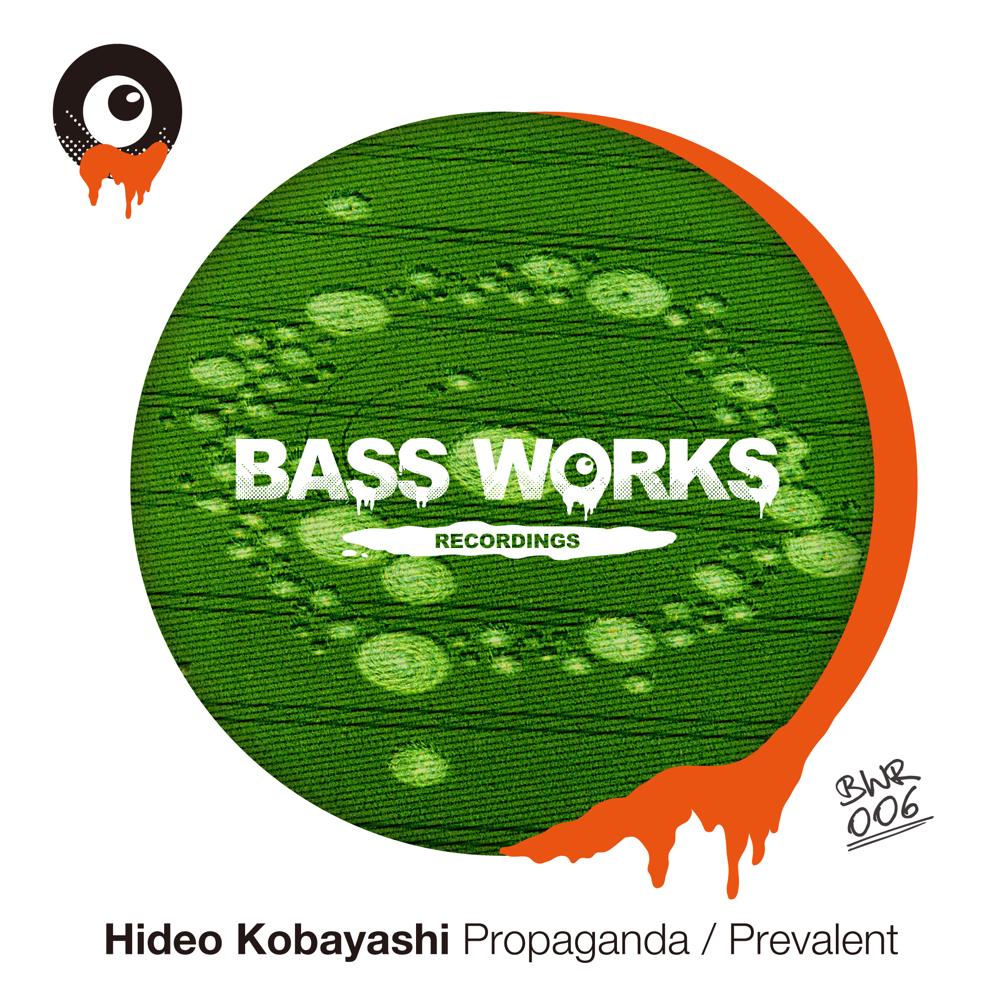 BASS WORKS RECORDINGS’s 6th WORK!! HIDEO KOBAYASHI…He is a solitary sound design specialist whom Japan is proud of. His long-awaited new tracks are BIG ROOM DARK TECHNO with his outstanding style and manly atmosphere which would be literally perfect for large vennue!! Defeat Big Brother!!
1984 Into the 2013. Does Prometheus dream of Electric Sheep?This is a sadistic masterpiece as if a hammer you threw would come through the other side.

HIDEO KOBAYASHI
One of Japan’s most prolific electronic music producer and DJ around now, his versatile musical prose is now a welcomed item in the world’s dance music scene. His releases of modern deep house and also floor-smashing techno under his own name, his collaborative production of top notch, tech-house with Ibadan’s Jerome Syndenham as Nagano Kitchen and regular DJ appearances at some of the coolest clubs around the globe, Hideo Kobayashi is a no holds bar, proficient, electronic samurai extraordinaire …
Biography.
Born and based in Nagano, in central Japan, like many in his generation, Hideo discovered electronic music when he first heard Yellow Magic Orchestra and Kraftwerk. In 1986, got the itch to compose electronic music with his sequencer, keyboards, drum machine and started performing live as well. In 1988, he discovered the enfolding world of clubs and dance music in Tokyo, and soon turned his attention to techno and began his production career in 1994, in the thick of the emerging techno scene in Japan.
While visiting the U.S. west coast in late 90’s, he discovered the then emerging deep house scene in the Bay Area. A chance meeting with Jerome Sydenhem at a club there, lead to the first collaboration with him and also DJ Said, as Lagos Nagano Players Association, with the release of DJ Tools Vol. 7 out of Ibadan in 2006. His release of Children Of The Drums, another collaboration with DJ Said from Chez Music, caught the attention of the legendary Francois K. Afterwards, Hideo found a new fan of his music in Francois K, who has been championing his music regularly.
Around the same period, Hideo returned to Japan, clutching a wealth of studio and DJ experience, at his base in Nagano, with Jerome Sydenhem, he produced the Nagano Kitchen album released from Apotek Records and Apt. International in Japan in 2007, which caught the attention of many DJs around the world. This period marked a turning point in his career. Hideo released the album, Zero in 2009 from Apt. International and a year later, his 2nd album, a Drama which featured appearances from Lisa Shaw, Ramus Faber, etc. With these handful of releases, Hideo’s music began captivating a wide range of the big DJs such as Tiesto, Paul Van Dyk, X-PRESS 2, Francois K., Richie Hawtin, Hernan Cattaneo, Laurent Garnier, Danny Krivit, Joe Claussell, Simon Dunmore, amongst others.
A fusion of Japanese mystique, mixed with a solid, top notch, modern production of silky deep house, tranquil tech-house and floor-rockin’ techno, his unique musical vision has gone beyond the limits of micro-genres to capture a cross section of dance music fans all around the world. Hideo also consolidated his status in the world’s dance music scene, by receiving numerous remix and license offers from the leading labels such as Ministry of Sound, Defected, King Street, Renaissance, Ibadan, OM, etc. His track, Amarillo was featured in Hernán Cattáneo’s mix CD, Renaissance and his track, Made in Japan was included in the mega-selling mix CD by Hook N Sling, Anna Lunoe & Axwell- Clubbers Guide To 2010, out of Ministry Of Sound. His remix of Shigeru Tanabu’s track, Adrian was included in the mix CD, Heartbeat Presents Mixed By Francois K. @ Air (Tokyo) as well. He also topped the Traxsource album chart, a first by a Japanese artist, with After The Drama, a dance floor oriented rework of the album, pattissier, released in 2011, which features various collaborations with Soil& “Pimp” Sessions, Rasmus Faber, Barbara Tucker & Tucillo, etc. The pattissier album went to Number 1 in the iTunes Store Japan Dance Chart as well.
Recently, he has returned to his techno roots and produced a new track, Black Panther, with his partner in crime, Jerome Sydenhem in their Nagano Kitchen alias, which was included in Drumcode’s 15th Anniversary compilation. Hideo has also found time to do remixes for Ken Ishii, London Elektricity, Tokyo Black Star and dOP.
Parallel with his production releases, he also zigzags across the world to DJ frequently, showcasing his versatile aesthetic of dance music panache and technique in many Asian and European clubs such as Moxa in Italy, AKA and Egg in London, the notorious Stadium in Jakarta, 360 in Dubai and at various clubs in Seoul amongst others as well as at various clubs across Japan.
One of Hideo most recent projects is his full-length album, Underground Business which was released in mid 2012. Underground Business showcases Hideo’s versatile nature, focusing his sights to a more, head-spinning, raw, electric, spacey, floor-rockin’ direction. Whether from his various productions being canned by the top DJs or with his rockin’ DJ sets at various clubs around the world, one can only look forward to this ever-progressing, prolific samurai wielding his many guises.