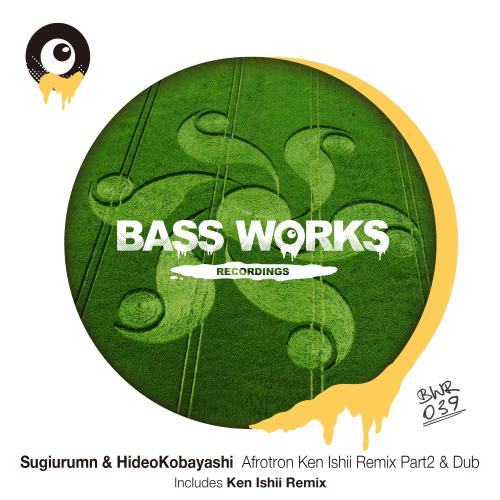 BASS WORKS RECORDINGS’ 39th Work!! We are proudly releasing the Big 3rd Bomb as a new year gift!! In a big anthem “Afrotron”by Sugiurumn & Hideo Kobayashi,
which have reached the top sale in BWR, there was a highly-reputable remix from Japanese Techno-God,Ken Ishii.
In fact there’s a next episode. In addition to Part 1, the different version, Part 2 and a Dub version were founded by a BWR expedition team.
The astonishing and destructive sound made them dance like crazy,twirling the torches and water bottles at the place!! Yes!! The extra-powered ” Afrotron ” has come back, having been mastered by Hideo Kobayashi, who got a new Techno name ” H.I.D “,which is exactly like ” The Empire Strikes Back ” or “The Terminator 2 “!! Part 1 is obviously great yet Part 2 comes also fantastic!! We, BASS WORKS RECORDINGS, will never let you down!!